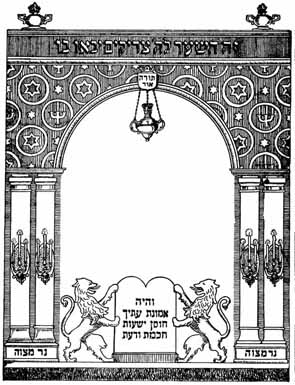 (The Palaces & The Chariot)

Our rabbis taught: Four entered the 'Garden' [pardes], namely, Ben Azzai, Ben Zoma, Acher, and Rabbi Akiva. Rabbi Akiva said to them, When you arrive at the stones of pure marble, do not say 'Water, water!' For it is said, 'Whoever speaks falsely shall not be established before My eyes' (Psalm 101:7). Ben Azzai took a look and died. Of him Scripture says 'Precious in the sight of the Lord is the death of His righteous ones' (Psalm 116:15). Ben Zoma looked and was stricken [mad]. Of him Scripture says 'Have you found honey? Eat as much as is sufficient for you, lest you be filled with it and vomit it out' (Proverbs 25:16). Acher mutilated the shoots. Rabbi Akiva departed unharmed.

What does CHaSHMaL [Ezekiel 1:4,27; 8:2] mean? Rav Judah said, Living creatures speaking fire (CHayyot 'eSH meMaLelot). In a baraita it is taught, [CHaSHMaL means] At times they are silent, at times they speak (CHaSHot meMaLelot). When the utterance goes forth from the mouth of the Holy Blessed One, they are silent, and when it doesn't, they speak.

Rabbi Ishmael said: How beloved is Israel before the Holy, Blessed One! Even more than the ministering angels! For [when] the angels want to recite songs first, before making, for instance, mountains of fire or hills of flame, the Holy, Blessed One says to them, 'Be silent, until I have listened to the songs and praises, prayers and pleasant melodies of Israel' as it is written, 'When the morning stars sang together' (Job 38:7)--this [refers to Israel--'and all the sons of God shouted for joy' (Job 38:7)--this refers to the ministering angels. When all the ministering angels and all the angels of the firmament hear the sound of the songs and praises that Israel sings below, they immediately open [their mouths and] in a loud voice say 'Holy, holy, holy is the Lord of Hosts, the whole earth is full of His glory' (Isaiah 6:3).

When the time arrives for the angels to sing [a song] and melody, the angel Shmu''el, the great, honoured and awesome prince stands at the windows of the lower firmament to listen intently to the sound of the songs, praises and melodies that arise from the synagogues and study houses, and lets the children of the firmament and the holy creatures listen. And when he has heard and has let every firmament hear, immediately countless classes of camps and armies of angels descend into the midst of the rivers of fire and the rivers of flame, and immerse themselves seven times, and examine themselves in the fire three hundred and sixty five times, in accordance [with the fact that] they are appointed to [do] worldly work and descend each day to bring peace to the world. And when the time of song arrives, they ascend to the firmament and purify themselves in the fire. But do angels require immersion? [Certainly not! But] because of the smell of those born of woman, who are masters of uncleanness and fluxes, they therefore immerse themselves in fire. Then they go like the angels of the seventh heaven (?).

After this they call to each other and talk to each other, and ascend from the rivers of fire with each others permission, and make themselves like light and like the most radiant lightning. Then they ascend by a ladder of fire, until they reach the armies of the seventh heaven, the pure chashmal(?), the holy creatures, the wheels of the chariot, the high and exalted throne of glory. Immediately they stand in awe and reverence, in fear and humility, and cover their faces with their wings in order not to look upon the form of God sitting on the chariot. Then they stand in classes of thousands upon thousands, many myriads, and hosts of hosts beyond number before the throne of the glory. And at that moment, the Holy Blessed One sits on the throne of glory filling the whole world, as it says, The whole world is full of His glory (Isaiah 6:3). Even the holy creatures prepare and sanctify themselves, with each one of the million crowns of [different] types of light on their heads, dressed in garments of light, and with their faces wrapped in lightning, while the Holy Blessed One [turns] His face from the holy creatures.

Then the 'wheels' of beauty, the cherubim of glory, and the holy creatures, sanctify, purify, clothe and wrap themselves more because the chariot is in front of them, the throne of glory is above their heads, and the Shechinah is high above them, and the rivers of fire are passing between them. Therefore they prepare, brighten and purify themselves with light seventy times, and then all of them stand in purity and holiness and recite songs, praises, melodies, exaltations, adulations, acclamations, and paeans, with [one] voice, one speech, one knowledge, and one melody.